Last week, I had the amazing opportunity to work in a collaborative partnership with NOAA, the Confederated Tribes of the Umatilla, and the Oregon Department of Fish and Wildlife to do some filming for a grant project sponsored by NOAA. One of my students, whose blog is here, did the actual filming, and I did a lot of the holding-of-lens and positioning-of-reflectors. 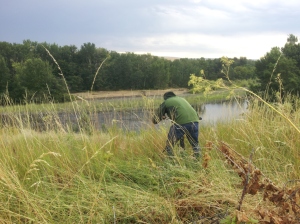 We shot over three days from the Upper Umatilla down to the lower on tribal lands and those controlled and regulated by ODFW. The one concept that kept sticking in my head, after all that shooting, was the idea of sinuosity. For a river to be healthy, for it to maintain fishes and bugs and such, it must be allowed to be as sinuous as possible. In other words, it must be allowed to drift and find its own path across a flood plain instead of being pinned to the side of a valley in order for more land to be used for agriculture.

When a river is pinned, its velocity is too high to sustain the natural life within it. The river heats up, and things in the river, like fishes and bugs, start dying, or get replaced by bottom-feeders and other elements that are not native to the stream. Not to mention the effects of pollution, run-off, etc. on the stream itself.

I connected with that idea of sinuosity and the unhealthiness of being pinned up against one bank and running too hot to sustain life. I work best in a state of sinuosity. Like today. I have been playing around with uploading photos to Picasa, checking out blogs about MOOCs, enjoying a recipe for Instagrahams, spying on my friends lives and keeping up with news stories through Facebook, working on this blog, and enjoying the sinuosity of drifting across the flood plain of my summer.

The trouble is, most of the real world thinks that sinuosity is multi-tasking, is unhealthy at best and at worst EVIL! Most of what I have encountered is an adult and particularly as an academic are efforts to pin me to the edges of the floodplain. Then I end up tearing loose in a flood and destroying a crop. Ok, maybe not destroying. But certainly not benefiting.

So my new goal is to learn to be sinuous more often. Basically, I need an SI > 1.

Also, here is a photo I took using the panoramic view of my phone camera looking out from Cabbage Hill with dawn to the east and a thunderstorm and double-rainbow to the west. Enjoy!